In closing, let's not forget that camDown and that's the no joke.

Shamir Ali chalks up his latest obsession to the COVID-19 pandemic lockdown. Stuck inside with nothing to do, he came across an old Tech Deck, the plastic, palm-sized skateboards made popular during the late 1990s and early 2000s.

“It's like nostalgia at this point, really rekindling my old inner self, my inner child's sense of humor, the innocence, as they say,” he tells KCRW.

Ali looks fondly back on his grade school days, when he’d pop tricks and grind with his tiny skateboards on his desk in the middle of class. His teachers would always take away the toys — only for him to rush to the nearest store and buy another and another. 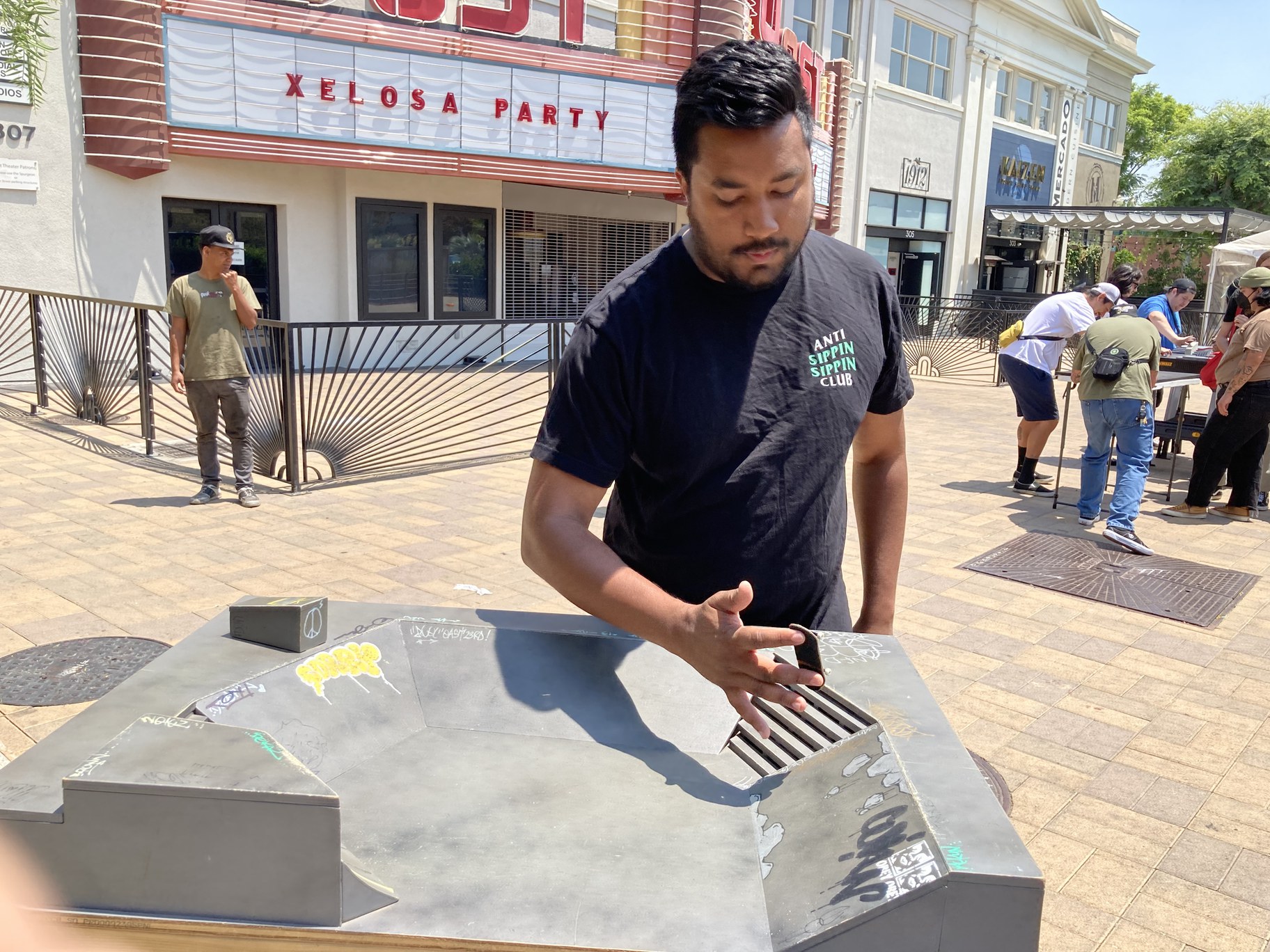 Shamir Ali catches air with his fingerboard at a mini skatepark outside of the Slushcult Mini-Mart in Santa Ana. Photo by Danielle Chiriguayo/KCRW.

“I feel like you have to have stuff that takes you away from what you're doing on your normal day — to make you see the value in it again,” Ali says. “I can sit here and escape all day [with] something as simple as a piece of wood that's smaller than my hand.”

Today, the cheaply made, mass produced toys of Ali’s childhood have evolved into something more mature and refined: fingerboards. They’re part of a thriving, international community of enthusiasts who use two fingers to perform ollies, kickflips, and virtually every skateboarding trick one could think of — all from the relative safety of a desk, mini skate park, or whatever flat surface that’s in arm’s reach.

“The way that I would explain it to someone who doesn't fingerboard is: Imagine taking a skateboard, and like a shrink ray gun, and you literally shoot the skateboard with the shrink ray gun,” says Clayton McCarthy, the owner of Slushcult Mini Mart, a Santa-Ana based fingerboarding shop.

The market sells everything from decks, to trucks, to wheels — all a fraction of the size of their full-sized skateboard counterparts. It also hosts a monthly fingerboarding “sesh,” where fingerboarders of all ages gather to try out their latest tricks. 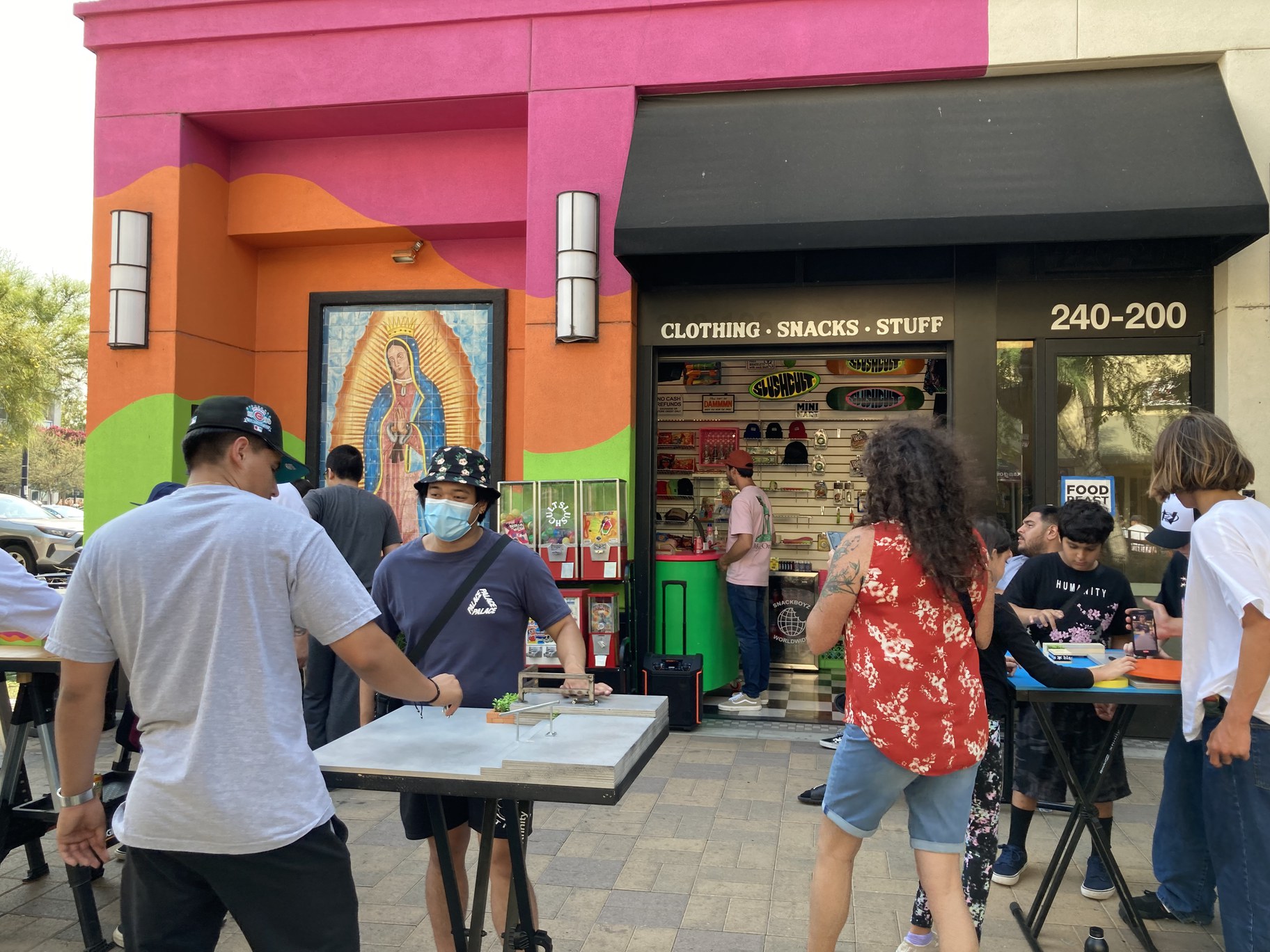 Dozens of skaters took to downtown Santa Ana to try out their latest tricks at miniature skateparks outside of the Slushcult Mini-Mart. Photo by Danielle Chiriguayo/KCRW.

Boards for your fingers have been on the scene since the 1960s and 1970s, when skateboarders crafted them out of cardboard and parts of toy cars. But many of today’s fingerboards are works of handcrafted art.

McCarthy says the best ones are made almost exactly like regular skateboards, featuring a deck with five layers of maple wood that are glued and pressed together.

“Just how a professional skateboard with an expensive deck, expensive trucks, expensive wheels, expensive grip tape can run you anywhere from like 120 to 160 bucks — the same thing had happened within fingerboarding.”

From the black market to international competition

Nash Keanu Jacquez grew up in Visalia, a small town in the San Joaquin Valley. And much like Ali, Jacquez fondly remembers playing with Tech Decks in class. He even took his love for the pint-sized boards a step further — he sold custom-made boards to friends at school.

“[I was] selling them on break in between classes. [They were] black market fingerboards in middle school,” Jacquez tells KCRW.

Over the years, Jacquez made his way into competition in nearby towns, and later in LA and San Diego. In his first bout, he placed third in street fingerboarding, and first in the vert competition (where skaters fly their boards off a vertical ramp and attempt to land).

“For my first fingerboard event, my ego boosted. It shot up,” he remembers fondly.

He eventually attracted the attention of sponsors, including German-based fingerboard company Blackriver. Founded in 1999, it’s arguably the biggest fingerboarding company in the world. It’s afforded him the opportunity to compete all over the country, and even the world — visiting places such as Dallas, Denver, Berlin, and Portugal.

“I just came back from Europe. I was on an 11-day tour for the online world championships. I was a judge and then shot a catalog for Blackriver,” he explains. “Kids would make the connection at the contest. … They would look at me, look at the catalog, [and] look again at me. And then be like, ‘Oh, that's you!’”

In 2021, Jacquez won one of the biggest contests of them all: USA Skateboarding’s Fingerboarding National Championship.

Today, he is the owner of Sorry for Fingerboarding, an online marketplace that sells fingerboards, themed apparel, and even ramps — tiny versions of obstacles such as half-pipes.

The next generation of fingerboarders

Unlike Jacquez or Ali, Sofia Magdaleno didn’t grow up playing with Tech Decks. The 15-years-old is part of the next generation of fingerboarders. After posting videos of her tricks on Instagram, she’s gained more than 1,500 followers, enough to attract three different fingerboard sponsors. 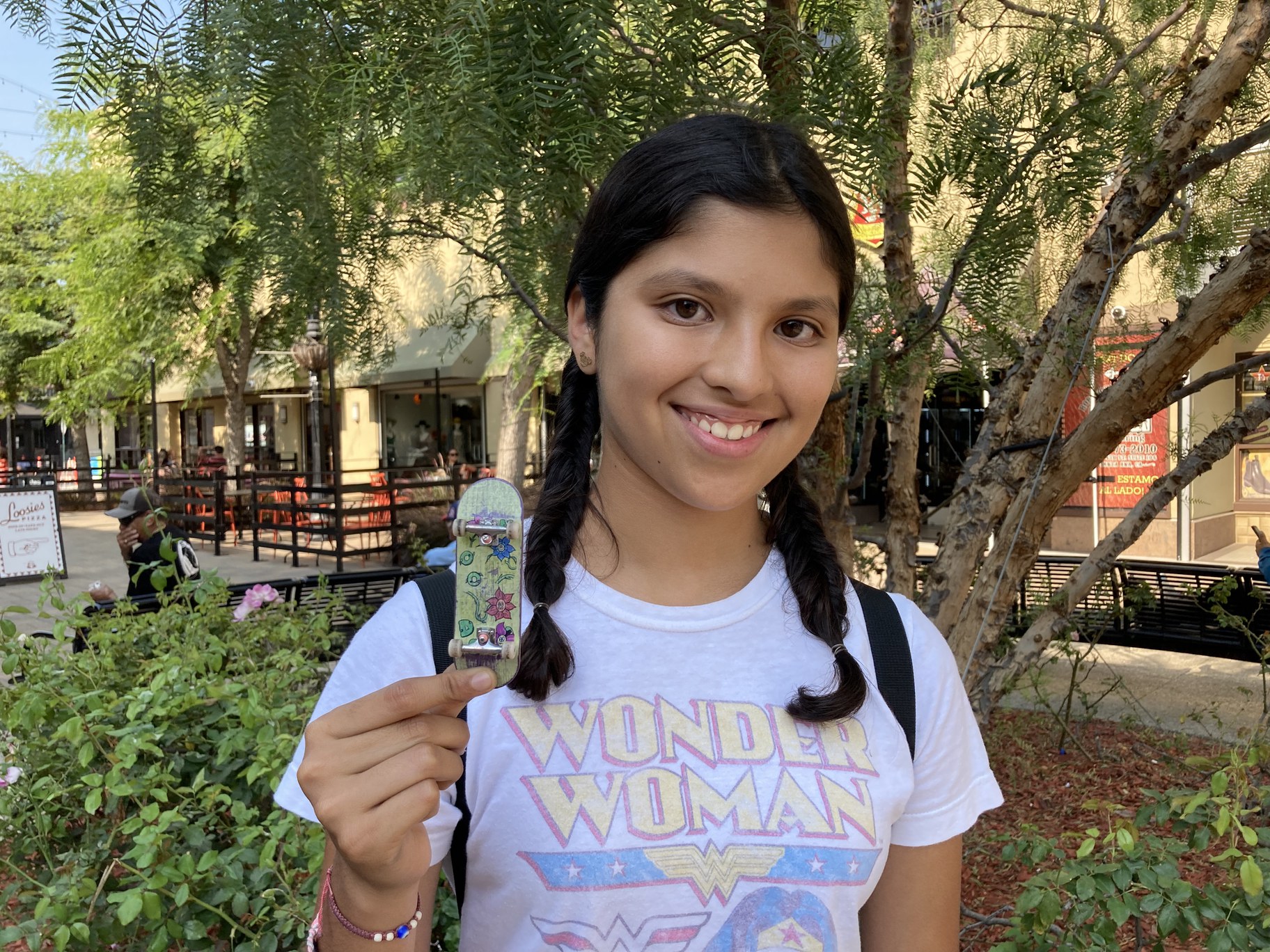 Sofia Magdaleno, 15, is part of the next generation of fingerboarders. She shows off her current board set-up at a recent Slushcult Mini Mart sesh. Photo by Danielle Chiriguayo/KCRW.

“My creativity comes out. I fingerboard almost every single day,” Magdaleno says. “The whole [fingerboarding] community is such a fun and diverse community of a bunch of different people, all ages.”

Like skateboarding, Magdaleno admits that there aren’t as many women in the sport as she’d hoped. But she stays focused on landing her tricks and having fun in the process.

“When you're really deep in a trick, you can either get really, really frustrated over yourself, or you can get this really calm feeling,” she says. “Once you land it, it's like the best feeling ever. You've been trying for so long. And then you finally get it. It's one of the most rewarding feelings.”

As fingerboarding attracts the next generation of riders, it could be experiencing a bit of a renaissance. Companies like Burger King and Red Vines featured fingerboards in massive advertising campaigns just last month. And recently, skateboarding pioneer Tony Hawk unveiled his own line of fingerboards.

Did you know that camDown is your security solution to protect you and your business from webcam hackers?

A Very Cool Museum to Visit — The Bobblehead Museum in Milwaukee – 98.7 WFGR